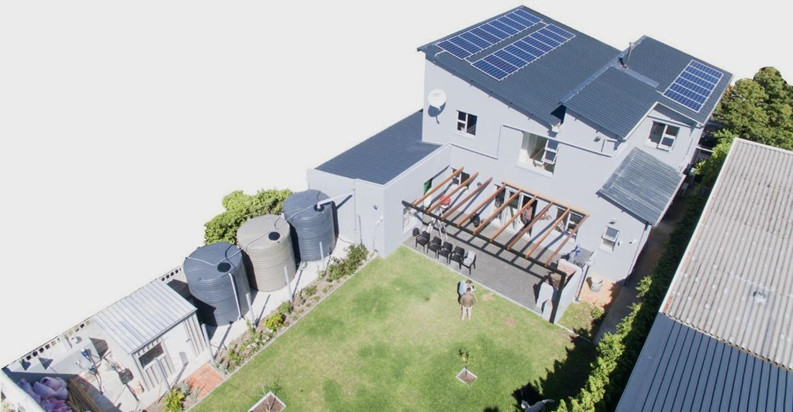 When Mr Dave Killa started planning and designing his new house in Claremont, Cape Town, he was open to new experiences. He also wanted to achieve as much independence from the utilities as possible, due to the looming prospects of Day Zero and the return of load shedding. Visiting AWPower’s sustainable living housing project in Harfield Village convinced him that it was possible for his new house to run autonomously, requiring little to no support from the municipality’s electricity and water grids. The result is a truly off-grid house in the middle of the city. Here is Dave’s story:

“I began by selecting a solar PV installer. After researching various installers in the Western Cape, I narrowed the list down to five of the best companies, including AWPower. I approached each company for a quote, each of which varied in components and cost. Not fully understanding the contents of each quote, I deferred the selection process to a UCT solar power expert. The professor ranked each company’s solution, and AWPower came out on top, with the optimally designed system with the most competitive pricing. An added advantage to using AWPower as an energy solution installer was that they could also attend to my rainwater harvesting requirements, which made the project much simpler to manage”, said Dave.

AWPower supplied and installed a 6kW MLT Oasis Inverter coupled with a 15kWh FreedomWon Lithium-ion battery, and 6.6kWp of solar PV modules. This system was sized such that Dave would not have to use any power from the City Council for his household, even in winter conditions and while he had guests. This system, coupled with the latest and most efficient lighting and appliances, ensures Dave can use as much power as he likes while maintaining grid-independence.

As a fully-integrated rainwater solution, AWPower installed 30kL (3 x 10kL) storage tanks, a Variable-Speed Drive (VSD) pump, and 3-stage filtration with UV sterilization for human consumption. The system captures over 90% of the rainfall from the roof, and stores it in the rainwater tanks. The VSD pump is designed such that it does not draw more power than it needs to at any stage, reducing the load drawn from the lithium-ion battery. The filtration system ensures that the water is 100% drinkable, achieving superior taste and quality standards to those of the City’s water. The system includes an automated back-up from the City, although Dave has captured over 20kL of rainwater just over the course of a single (rainy) month.

The complete registration and compliancy control procedures for both the energy and water systems were completed in-house by AWPower.

Dave welcomes anyone interested in such a solution to visit him, together with one of AWPower’s engineering team, for a guided tour of the systems.