With current global and local attention focused on health and economic turbulence, load shedding has fallen several rungs down the concern list for South Africans confined to their homes during the nationwide lockdown. Energy experts have however warned that the respite is temporary; as large-scale commercial operations resume, South Africa’s national electricity grid will again be under pressure. When this pressure increases, so will the likelihood of load shedding.

In Harfield Village, a leafy suburb in Cape Town, AWPower was commissioned during the course of 2019 to design and install a solar PV system to achieve the home owner’s goal of avoiding downtime during prolonged load shedding, while saving on electricity costs over the long term.

The homeowner’s requirements were to:

Enable the washing machine, tumble dryer, dishwasher, plus electric oven and hob to be used (albeit not all at the same time) during daytime while still allowing the battery to be replenished by a rooftop-mounted PV array.

The AWPower engineering team designed a system with the following specifications: 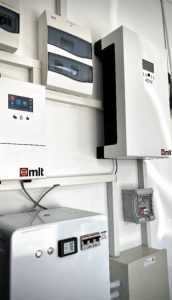 The system was installed in June 2019. During the first month of operation, fine tuning was performed to achieve the following:

During the winter and spring months, it was found that municipal electricity usage on average dropped to roughly 30% of previous levels. During summer, the system can deliver all the house’s consumption needs for weeks at a time, with grid top-up only required on overcast or rainy days. Monitoring of the solar input, usage and battery patterns revealed that during many summer days the battery would be fully charged before 11h00 each day. This substantial excess solar capacity enabled installation of an inverter-based air conditioning unit in the house’s home office, running effectively cost-free on days when it is needed.

“Our initial goal was to side-step load shedding, with long-term energy savings factoring in the likely continued increase in Eskom rates as a secondary objective. The system has met and exceeded expectations on both these fronts. We have not had any load shedding downtime at all since it was installed, and the excess power during hot summer days has now enabled us to add zero-cost air conditioning, which is fantastic! The AWPower team were very thorough in their initial design and specification, installation was done extremely neatly and professionally, and the real-time remote monitoring tools they have provided enables us to keep an eye on usage and battery levels from anywhere. Our house is now both unaffected by the worries of load shedding and practically off-the-grid for a large portion of the year!”